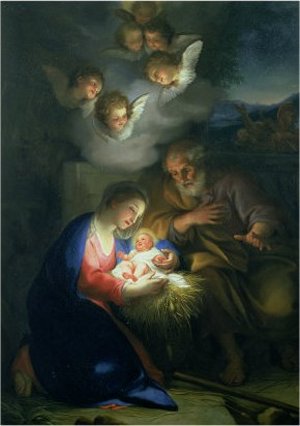 Mary, who was a young woman gentle and good, lived in the town of Nazareth. She was soon to marry a carpenter named Joseph. She was visited one day by an angel named Gabriel who told her that she would have a son and that she should name him Jesus. He said the Holy Spirit would be with her and the child would be the Son of God.

Mary and Joseph married. Then one day they had to travel to Bethlehem to pay their taxes. It was a long journey. When they arrived in Bethlehem, there was no place for them at the inn. They spent the night in the stable. That night the baby was born. They named him Jesus, just as the angel had said.

An angel appeared to shepherds who were in the nearby fields. A great light shone down on them, and the angel told them, "Do not be afraid. A Savior who is Christ the Lord is born tonight." The shepherds left in search of this child. They found him in the stable.

Wise men from the east followed a star to Jerusalem in search of Jesus. King Herod tried to trick the men, so he could find out where this child was that they were calling "King of the Jews." (He was afraid the child would one day take his throne from him.) The wise men found Jesus in Bethlehem in a house. They worshiped him and gave him gifts of gold, frankincense (incense) and myrrh.

When Jesus was twelve years old, Mary and Joseph took him with them to Jerusalem for the Feast of the Passover. On the way home there was such a crowd, they did not know Jesus wasn't with them. When they went back they found him in the Temple talking to the teachers and the doctors of the law. He told them, "Did you not know that I must be about my Father's business?" He went back to Nazareth and was obedient to them. Jesus grew in wisdom, stature, and in favor with God and men.

What does this story
mean to me?
When Jesus was a child he honored Mary and Joseph and respected the authority they had over him. Think about it. The Son of God, Creator of the universe showing children how they should behave!

How can you honor your parents? you can obey them, co-operate with them, and always be truthful. By doing these things you earn their trust, and the family enjoys peace and harmony.

Memory Verse
And the angel said unto them, Fear not: for, behold, I bring you good tidings of great joy, which shall be to all people. For unto you is born this day in the city of David a Saviour, which is Christ the Lord. And this shall be a sign unto you: Ye shall find the babe wrapped in swaddling clothes, lying in a manger. Luke 2:10-12

Song of The Child Jesus

Would you like to study an Art Lesson about Jesus in the Temple?

Spanish Bible Activities Select stories #165-172 in the list for activities to accompany this Bible story.


Books
Press "Go" to search for books about Jesus.
Credits and Solutions
Puzzles on these pages courtesy of
Songs of Praise and Armored Penguin