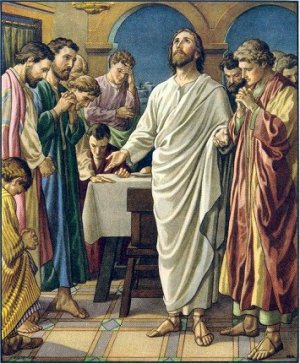 Jesus needed some special disciples to help him. They were called apostles.

Later he called others to follow him; Philip, Bartholomew ( Nathanael),
and Matthew (Levi), who was a tax collector. There were also five more chosen.

We learn a song to the tune of "Jesus Loves Me" to help us remember them.

Jesus called them one by one,
Peter, Andrew, James and John,
Next came Philip, Thomas, too,
Matthew and Bartholomew.
James, the one they call the Less,
Simon, also Thaddaeus,
The twelfth apostle Judas made.
Jesus was by him betrayed.

After Jesus died, rose again, and went back to the Father, Matthias was chosen to replace Judas Iscariot, who had betrayed Jesus.

Later Paul was chosen to be an apostle. He wrote most of the letters in the New Testament.

More pictures of Jesus and his disciples 1 2 3 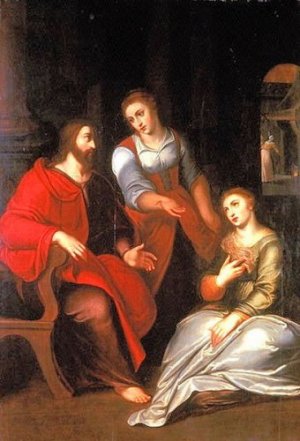 Jesus had some very close friends; two sisters and their brother. Once when he was in their home, Mary sat at Jesus' feet listening to his teachings.

Martha, her sister, was busy getting the meal ready, and she became upset because she was having to do all the work by herself. She wanted Jesus to tell Mary to help her

Jesus said, "Martha, Martha, you are worried and upset about many things, but only one thing is needed. Mary has chosen what is better, and it will not be taken away from her."

What does this story
mean to me?
In this story we see the contrast between the two sisters, Mary and Martha. It was not a bad thing for Martha to prepare a meal for the family. It was a necessary task, but she was becoming upset and harboring ill feelings toward her sister, Mary, because she was not helping. Jesus said Mary had chosen "the better part". She was sitting at the feet of Jesus showing her closeness to Him and her submission to Him.

What about you? Are there times when you need to turn off the TV and study for your Sunday School lesson? Do you look forward to going to church and being with other Christians? Do you remember to say your prayers at night? Choose the better part.

Memory Verse
But one thing is needful; and Mary hath chosen that good part, which shall not be taken away from her. Luke 10:42
Take the online test

Song of Mary and Martha

Research Links
English Bible Activities Select stories #178 and 209 in the list for activities to accompany this Bible story.

Spanish Bible Activities Select stories #179 and 209 in the list for activities to accompany this Bible story.

Image Jesus with Mary and Martha by Otto van Veen