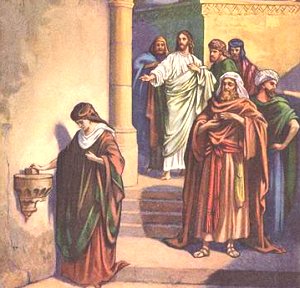 The temple was big and beautiful. Many people came there to worship God. Inside the temple were some big money boxes. People put money in them. The money was for the temple and all that was used in worship to God.

One day Jesus sat across from the money boxes. He saw many rich people put in lots of money. Then one poor woman, a widow, walked up to the boxes. She put in two small copper coins worth less than a penny.
Jesus looked at his friends. "This poor woman put in more than the rich people did," he said. "Here's why: the rich people still have much money left. But this woman only had two coins. She did not have any more money. The rich people only gave part of what they had. She gave all of what she had." 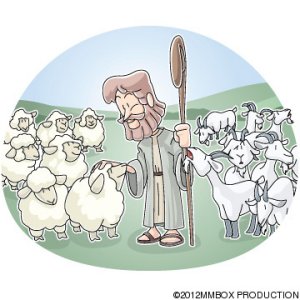 The Sheep and the Goats

Jesus, on another occasion, told a story about sheep and goats. He said that when he returns, he will separate people as a man would separate his sheep from his goats.

The people didn't remember doing these things for Jesus, but he replied, "Whatever you did for one of the least of these brothers of mine, you did for me."

What does this story
mean to me?
Jesus told his disciples the widow had put in more than all the others. How could this be? She only put in two coins.

The widow puts in two small coins. She has given 100% of her money and has nothing left to buy food. She wants to give, and she has faith that God will provide for her needs. Wouldn't it be interesting to know what happened next in the story? Do you think the woman went hungry that night? God says to put Him first, and the things we need will be provided for us. Trust Him.

Memory Verse
Verily I say unto you, That this poor widow hath cast more in, than all they which have cast into the treasury: For all they did cast in of their abundance; but she of her want did cast in all that she had, even all her living. Mark 12:43-44
Take the online test

Song of The Widow's Gift

Spanish Bible Activities Select story #225 in the list for activities to accompany this Bible story.

Thanks to Christian Clip Art for sheep and goats image