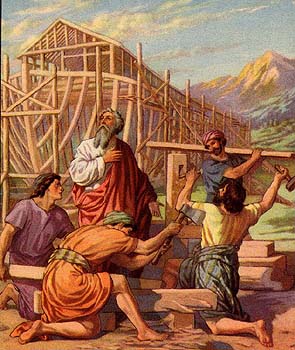 View another painting of the ark

Noah was a good man who obeyed God. Everyone else in the world had become bad.

God told Noah that He was going to send a flood to destroy all living things. He told Noah to build a big boat (known as Noah's ark).

God sent two of each kind of bird and animal to Noah to load in the ark. He sent more than two of some of the animals. Noah also loaded his three sons, their wives, and his own wife. It began to rain. God closed the door.

It rained for 40 days and 40 nights. Everything on earth was under water. Everyone on earth died, but Noah and his family were safe and dry.

When the rain stopped and the land dried, God sent a rainbow as a sign of the promise that He would never again destroy the earth with water.

What does this story
mean to me?
Noah was a righteous man who loved God very much. He lived in a world full of sin. However, he was loyal to the Lord and continued to follow Him, even when God told him to build a big boat and the people made fun of him during the time he and his sons were building the ark.

Can you stay loyal to what is right even if your friends make fun of you? Are you thankful for the things God has provided for you and your family?

This story about Noah can be found in the Bible in Genesis chapters 6-9.

Memory Verse
But Noah found grace in the eyes of the Lord. These are the generations of Noah: Noah was a just man and perfect in his generations, and Noah walked with God. Genesis 6:8-9
Take the online test

Research Links
English Bible Activities Select stories #7,8,and 9 in the list for activities to accompany this Bible story.

Spanish Bible Activities Select stories #7,8, and 9 in the list for activities to accompany this Bible story.

Read and hear the story of Noah from Kids' Bible Stories