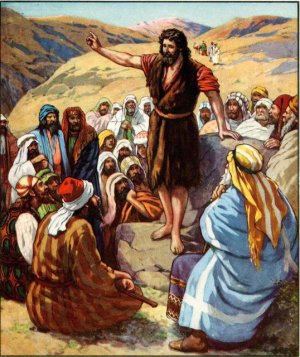 Mary, the mother of Jesus was a relative of Elizabeth, the mother of John. After the angel appeared to Mary telling her of the coming of Jesus, she went to see Elizabeth and learned that she, too, was expecting a child.

Now Elizabeth and her husband Zechariah were advanced in years and their child was a very special child. He had been chosen by God for a special mission. That mission was to prepare the hearts of the people for the coming Messiah.

The prophet Isaiah spoke of John as "the voice of one crying in the wilderness" telling the people to get ready for the coming of Jesus. John told them that Jesus would be greater and mightier than he, and that he was not worthy to loosen the straps or even carry the sandals of the Lord.

He was dressed in clothes made of camel's hair and had a leather belt around his waist. He lived in the desert and ate locusts and wild honey.

He went through all the country around the Jordan preaching a baptism of repentance for the forgiveness of sins. Crowds of people came confessing their sins and he baptized them in the Jordan River.

The tax collectors asked what they should do, and he told them to be honest in their collection of taxes and to not collect more than they were required to.

The soldiers asked what they should do, and he told them to not take money from people illegally, to always tell the truth and not falsely accuse people. They were to be content with their pay and not grumble about it.

John always spoke the truth, even when people didn't want to hear it. He fearlessly confronted King Herod with the evil things he had done. Eventually, this stand for the truth cost John his life.

John told the people to be generous with the things they owned. Do you have something you could share? Do you have clothes that you could give to a child who needs clothes? Maybe you and your family could even buy new clothes for those who need them.

Does your church or school sometimes ask you to bring canned food for the poor? Go with your parents to the store to buy food for them. You will be blessed if you do, and it will give you great happiness.

This story about John the Baptist can be found in the Bible in Luke 3:1-19

Memory Verse
Among those born of women there has not risen one greater than John the Baptist; but he who is least in the kingdom of heaven is greater than he. Matthew 11:11 (NKJV)
Take the online test

Song of John the Baptist

Spanish Bible Activities Select story #173 in the list for activities to accompany this Bible story.