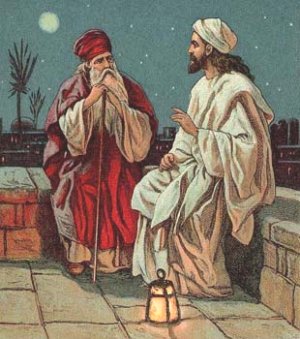 Nicodemus (nik uh DEE mus) was a ruler of the Jews of the group called the Pharisees (FAIR uh seez). He had seen the miracles that Jesus had performed and had heard him teach. He believed that Jesus was truly a teacher sent from God. He wanted to go and talk to him, but he waited until it was nighttime to go.

The Bible doesn't say why he went at night, but we do know that the Jewish leaders were angry with Jesus and were looking for a way to destroy him. Maybe Nicodemus was afraid to go to him in public during the day.

He told Jesus that surely God was with him, or he would not have been able to do all the wonderful things that Jesus had been doing. Then Jesus began to teach him. He told Nicodemus that if a person wanted to see the kingdom of God, he must be born again.

Born again! Nicodemus could just visualize himself becoming a baby again. How could this be? It seemed like an impossible thing for a grown man to be born again!

But Jesus was not talking about a physical birth. He was speaking of a spiritual birth. He said that one must be born of water and the Spirit. Just as you can't see the wind that blows, you cannot see the new birth. The person may look the same, but he or she is a changed person inside.

You will remember that when the snakes were killing the children of Israel in the wilderness, God told Moses to make a serpent or snake of brass and lift it up on a pole. Everyone who looked at that snake on the pole was healed by God. Jesus said that He also must be lifted up, and that whoever believes in Him should not perish, but have eternal life.

Then Jesus told Nicodemus the beautiful words, "For God so loved the world that He gave His only begotten Son, that whoever believes in Him should not perish but have everlasting life." Jesus came to save the people of the world, not to condemn them.

We read more about Nicodemus after the death of Jesus. Joseph of Arimathea
(air uh muh THEA uh) was a rich man and a member of the Jewish council. He was a good and just man and a disciple of Christ. He had been waiting for the kingdom of God and he believed that Jesus was the One who had been promised.

He took courage, but came secretly and asked Pilate for the body of Jesus so that he could bury him. The man who came with him was Nicodemus.

The Jewish custom was to rub spices on the body of the person who had died in preparation for burial. They brought about 100 pounds of spices; a mixture of myrrh and aloes, and prepared the body. They wrapped Jesus' body in strips of linen.

Near the place where Jesus was crucified there was a garden, and Joseph had a new tomb there, one that had never been used. The burial place had been cut out of a large rock. They placed the body there, rolled a large stone against the door of the tomb and left. But Mary Magdalene and the other Mary sat down opposite the tomb.

Read the story in Spanish Nicodemo

What does this story
mean to me?
Nicodemus was eager to learn. When he didn't understand, he kept asking questions until he did reach some kind of understanding.

Don't be afraid to ask questions. If you don't understand something in class, ask a question. Your question might be the very one a classmate would like to ask, but he or she may be afraid to speak up. Sometimes questions help the teacher to know how she can make the lesson clearer to her students.

Don't be afraid to ask your parents questions. They will give you much wiser answers than your friends will give you. Your parents have your best interest at heart, and they will answer you in a helpful way.

This story about Nicodemus can be found in the Bible in John 3:1-21

Memory Verse
For God so loved the world that He gave His only begotten Son, that whosoever believeth in Him should not perish, but have everlasting life. John 3:16 (KJV)
Take the online test

Spanish Bible Activities Select story #178 in the list for activities to accompany this Bible story.


Books
Press "Go" to search for 17 People in The Life of Jesus
Credits and Solutions
Sunday School card from 1904, courtesy of The Bread Site public domain clipart collection