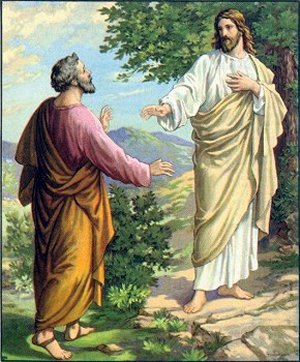 Jesus was teaching in the region of Caesarea Philippi (ses uh REE uh, fih LIP eye). This was one of the most beautiful places in the country with trees, flowers, and sparkling streams of water. On this particular day, as he frequently did, he went off by himself to pray.

His disciples found him and he asked them, "Who do men say that I am?"

But Jesus wanted his disciples to say what they thought about him.

Simon Peter said, "You are the Christ, the Son of the living God." How could Peter be so sure about this? Jesus gives us the answer to that question.

He called Peter's name, Simon Bar-Jonah, or Simon son of Jonah. Jesus said the fact that Peter knew who he was, had come as a divine revelation. God Himself had told Peter.

Jesus told Peter that He was going to build His church, and no force of Satan would ever be able to overcome it. His people would be triumphant and win over evil.

Peter was going to have the "keys" of the kingdom. He would tell people the things that pleased God and the things that were displeasing to God. He was going to be God's spokesman and people would have to obey the teachings of God that Peter preached. Jesus told Peter, "Whatever you bind on earth will be bound in heaven, and whatever you loose on earth will be loosed in heaven."

Then Jesus told them that they must keep his true identity a secret for a while longer. He would have to suffer and die and be raised again.

Peter didn't want to even think about Jesus dying, and one day he said to him, "Lord, this shall not happen to You!"

But Jesus knew that Satan was trying to harm Him through the words of Peter, and He said to Peter, "Get behind Me, Satan."

About a week later Jesus took Peter, James, and John up on a high mountain. He was transformed (transfigured) or changed in front of their eyes. He was shining as bright as the sun. This was further proof to them that Jesus really was the Son of God!

Read the story in Spanish Pedro le Confesa a Jesús

What does this story
mean to me?
When Peter believed that Jesus was God's son, he said it to others, and it made a big change in his life. God could now use him as He wanted.

Not that Peter was perfect. He wasn't. We even remember that one night he even said he didn't know Jesus. But he later was very sorry for saying that.

When we confess Jesus with our lives and show others that we love Him, God can use us for His purposes. Look for opportunities, and God will show you ways and times that you can tell others about your faith in Jesus. You too, can confess him as Peter did and cause many to believe.

You can read about Peter's confession in the Bible in
Matthew 16:13-29

Memory Verse
Simon Peter answered and said, "You are the Christ, the Son of the living God." Matthew 16:16 (NKJV)
Take the online test