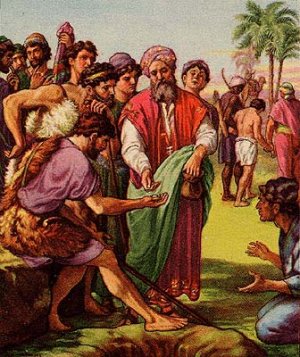 Jacob had 12 sons and Joseph was his favorite. Jacob gave Joseph a very special coat to show how much he loved him. This made Joseph's brothers jealous.

One day Jacob sent Joseph to the field to check on his brothers. They were still angry about his beautiful coat, so they threw Joseph into an empty well.

Then they dipped his special coat in goat's blood and took it to their father, Jacob. He thought Joseph had been killed by a wild animal. His sons did not tell him they had sold Joseph to some traders going to Egypt.

When Joseph was in Egypt, the king (called Pharaoh) had two dreams. He dreamed about seven fat cows and seven skinny cows that came up out of the river. The skinny cows ate the fat cows, but they were no bigger than before.

Then he dreamed about seven full heads of grain on one stalk and seven thin, scrawny heads of grain. The thin heads ate the full heads. No one could explain the king's dream, but God helped Joseph to understand the meaning of the dreams.

Pharaoh chose the wisest man he knew. He gave the job to Joseph!

Read the story in Spanish José

What does this story
mean to me?
Joseph was the next to the youngest son in his family, yet God chose him to do great things. He was mistreated by his brothers, but because of the events that happened in his life, he became a very important man in Egypt and saved his family during the time of great famine.

Do you think you have to be older to do great things for the Lord? Or is it only the adults in your family who can do good things for others? Think about some ways you can help others, even at a young age.

Life wasn't always fair to Joseph, especially when his brothers sold him into slavery, or when Potipher's wife accused him wrongly and he spent some time in prison. Does God promise us that our life will always be fair or easy? If life is unfair to you, do you stop trying and start pouting, or do you keep working hard?

This story about Noah can be found in the Bible in Genesis chapter 37.

Memory Verse
The Lord was with Joseph, and that which he did, the Lord made it to prosper. Genesis 39:23
Take the online test

Spanish Bible Activities Select stories #28-33 in the list for activities to accompany this Bible story.


Books
Press "Go" to search for books about Joseph.
Credits and Solutions
Puzzles on these pages courtesy of
Songs of Praise and Armored Penguin