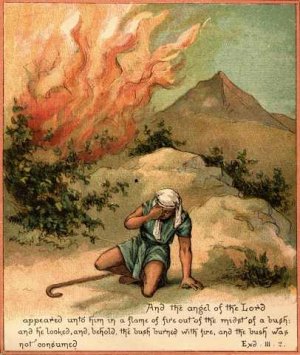 After Joseph died, an evil king ruled Egypt. He was afraid of Joseph's huge family. He made slaves of the people and made them work very hard building cities and working in the fields. He was afraid the boys would become soldiers and fight against him. He ordered that all the boy babies be killed.

When Moses was born, his mother hid him for 3 months. Then she made a basket of grasses and tar to make a small boat and put him in the Nile River. Pharaoh's daughter found him. His sister ran to get their mother to be a nurse for the child. The daughter of Pharaoh adopted him.

When he was grown, he had to leave Egypt and went to the land of Midian. One day while caring for sheep, he saw a strange sight. A bush was on fire, but it didn't burn up. God spoke to him from the burning bush and told him to go to Egypt and free the people of Israel from slavery. Moses was afraid and didn't want to go, but he went. His brother Aaron went with him.

Moses and Aaron went to see Pharaoh. They told him that God wanted the children of Israel to leave Egypt, but Pharaoh said he didn't know the Lord and would not let the people leave. God had given Moses and Aaron the power to work miracles. Aaron threw his rod down and it became a snake. Pharaoh's magicians threw their rods down and they became snakes, but Aaron's snake ate their snakes. God was showing his power.

Ten plagues came upon the Egyptians because Pharaoh would not let the people leave. A plague is something really bad that happens and causes a lot of suffering and death. Finally after the tenth plague, when his son died, Pharaoh let them go.

Read the story in Spanish Moisés

What does this story
mean to me?
God chose Moses to do great things. He was saved when other baby boys were being killed. He was raised in Pharaoh's household and learned many things that he would need later, as God had bigger plans for him. He was chosen to lead God's people out of Egypt because Pharaoh was treating them badly.

Moses was not a perfect man and did not see himself as the one who should lead the Israelites out of Egypt. He made many mistakes, but he loved God. He often complained and made excuses for his failures.

God often uses people who are not perfect to accomplish His will. When God says He will help us, He really means it. We need to put our trust in God and know that He will be with us when we rely on Him during the good times and the hard times. Even when we don't believe we can do something, with God's help we can.

This story about Moses can be found in the Bible in Exodus chapters 2-12.

Spanish Bible Activities Select stoiesy #35-39 in the list for activities to accompany this Bible story.