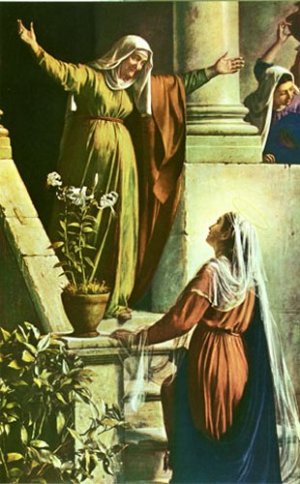 Elizabeth was a descendant of Aaron. She was married to a priest of Israel named Zacharias. It was said of them that they were both "righteous before God, walking in all the commandments and ordinances of the Lord blameless". She and her husband were both getting quite old and they had never had children.

One day Zacharias was serving as priest in the temple and the angel Gabriel appeared to him. It frightened him, but the angel told him to not be afraid. God had a message for him. Elizabeth was going to have a son! After all these years their prayers were being answered. Zacharias was to name him John.

The angel said of the child that was to be born that he would be great in the sight of the Lord. He was not to drink wine nor strong drink, and he would be filled with the Holy Spirit. His mission would be to prepare the people for the coming of the Lord.

Zacharias didn't believe what the angel had spoken to him. Because of his unbelief he would not be able to speak until the child was born. He would be mute.

The people outside the temple wondered why he was staying so long in the temple. When he finally came out and was speechless, they knew he had seen a vision in the temple.

True to the words of the angel, Elizabeth did conceive a child. She hid herself for five months and didn't go anywhere. One day she had a visitor. It was her cousin Mary, who had also been visited by the angel Gabriel who told her she would be the mother of Jesus. But even before Mary could tell her the news, Elizabeth, filled with the Holy Spirit, already knew. She said to Mary, "Blessed are you among women, and blessed is the fruit of your womb! But why is this granted to me, that the mother of my Lord should come to me? " Mary then began her beautiful song.

"My soul magnifies the Lord, And my spirit has rejoiced in God my Savior. For He has regarded the lowly state of His maidservant; For behold, henceforth all generations will call me blessed."

Mary stayed with Elizabeth for three months, then she went home. By now it was time for Elizabeth's baby to be born. When the baby arrived, her friends and relatives were so happy for her. They all supposed he would be named Zacharias after his father, but Elizabeth said, "No, he shall be called John."

John? None of their relatives were named John. Surely Elizabeth must be mistaken. They made signs to Zacharias asking him about the child's name. He asked for a writing tablet and wrote, "His name is John." Then his silence was broken and he could talk again. He began praising God for the wonderful event which had taken place. People wondered, "What kind of child will this be?" And Zacharias prophesied of him, "And you, child, will be called the prophet of the Highest; For you will go before the face of the Lord to prepare His ways."

Elizabeth and her husband raised the child and he grew and became strong in spirit.

You can learn more about John here.

What does this story
mean to me?
We have also been chosen for a special purpose. We read in 1 Peter 2:9 "But you are a chosen generation, a royal priesthood, a holy nation, His own special people, that you may proclaim the praises of Him who called you out of darkness into His marvelous light." (1 Peter 2:9 ) Our purpose is to proclaim the praises of God. Let us take this calling seriously and live up to what God expects of us as His chosen children.

You can read about Elizabeth in
Luke chapter 1

Memory Verse
The Lord has done great things for us, and we are glad. Psalm 126:3 NKJV
Take the online test

Research Links
English Bible Activities Select story #164 and 166 in the list for activities to accompany this Bible story.

Spanish Bible Activities Select story #164 and 166 in the list for activities to accompany this Bible story.


Books
Press "Go" to search for books about John the Baptist.
Credits and Solutions
All of the images on this page are in the public domain.