1. Some people call me Old Glory, others call me the Star Spangled-Banner, but whatever they call me, I am your Flag, the flag of the United States of America. Something has been bothering me, so I thought I might talk it over with you, because it is about you and me.

2. I remember some time ago people lined up on both sides of the street to watch the parade. And naturally, I was leading every parade, proudly waving in the breeze. When your daddy saw me coming, he immediately removed his hat and placed it against his left shoulder so that the hand was directly over his heart....remember?

3. And you, I remember you. Standing there as straight as a soldier. You didn't have a hat, but you were giving the right salute. Remember little sister? Not to be outdone, she was saluting the same as you, with her right hand over her heart, remember?

4. What happened? It's still the same old flag. Oh, it has a few more stars since I was a boy. A lot more blood has been shed since those parades of long ago. But now I don't feel as proud as I used to. When I come down your street, you just stand there with your hands in your pockets, and I may get a small glance and then you look away. Then I see the children running around you shouting. They don't seem to know who I am. I saw one man take his hat off, then look around. He didn't see anybody with theirs off, so he quickly put his hat back on.

5. Is it a sin to be patriotic anymore? Have you forgotten what I stand for and where I've been?....Anzio, Guadalcanal, Korea, and Vietnam. Take a look at the Memorial Honor Rolls sometime, of those who never came back. They fought to keep this Republic free, One Nation Under God....When you salute me, you are actually saluting them.

6. Well, it won't be long until I'll be coming down your street again. So when you see me, stand straight, place your right hand over your heart, and I'll salute you, by waving back, and I'll know that ....you remembered!

(I would like to give credit to the author of this piece. Contact me if you know who wrote it.)

Many countries have flags that are red, white, and blue, but there is only one "Stars and Stripes."

Johnny Carson: Hey! Francis, tell us what you've been up to!

Francis Scott Key: I am Francis Scott Key and I wrote our national anthem. I was watching a battle in the harbor of Baltimore. I began writing a poem as I watched the English shoot bombs and rockets at Fort McHenry. I kept my eyes on the large U.S. flag flying over the fort.

Tattered Soldier: I was a soldier... As long as our flag was flying, we knew the English had not won. Night came, but in the light of the rocket's red glare, he could still see our flag. Then we did not see our flag for a long time because of the smoke and haze. Was it still there? Dawn came, the mist cleared for a moment, and we saw the flag again!

Francis Scott Key: Later when I was back on land, I showed the poem to my brother-in-law. My brother-in-law liked it so well that he had it printed. The people liked it, too. People began to sing the verses to a familiar marching tune. Soon, "The Star-Spangled Banner" was sung everywhere. I just couldn't believe it myself!

Johnny Carson: Here comes another Francis...(but not the talking mule!) Tell us about yourself, Mr. Bellamy.

Francis Bellamy: I wrote the "Pledge to the Flag" in 1892 to celebrate the 400th anniversary of the discovery of America. Let's all stand for the pledge and then join together in singing "The Star-Spangled Banner."

Johnny Carson: It's Betsy Ross herself. Have a seat, please.

(Betsy sits in a rocking chair.)

Johnny: Betsy, tell us all we need to know in 30 words or less.

Betsy Ross: I was a seamstress who made flags in Philadelphia at the time of the American Revolution. The story goes that Washington wanted six-pointed stars in the flag. But I suggested five-pointed stars. To show him how easy it would be, I took a piece of paper, folded it and with one snip cut a perfect five-pointed star. I think I made the first official United States flag.

(These students are holding flags made of poster board and glittering stars.) 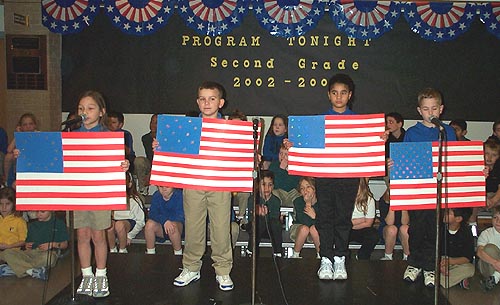 Flag Person 1: Our nation's flag has changed over the years as the U.S.A. grew from the thirteen colonies to the fifty states we are today. These are just a few that have marked important times in our history.

The first official flag of the U.S.A. had 13 stars and 13 stripes. They represented the original 13 colonies.

Flag Person 2: The flag of 1812 had 15 stars and 15 stripes because two new states; Kentucky and Vermont, had joined the Union. This was the flag Francis Scott Key viewed as he wrote our national anthem.

Flag Person 3: By 1818, five more states had been admitted, making the total now 20. Congress agreed that it would be impractical to continue adding stripes and stars to the flag. They decided to go back to 13 stripes and have a star for each state.

Since there was no official rule about how the stars should be arranged, there were many different designs. It was not until 1912 that the arrangement of rows was selected as the permanent design. Today our nation boasts the grand 50 star flag. It is the emblem of the land we love.


(Bring two chairs on stage for the Make-up Artists scene. George and Martha Washington come and sit in the chairs as the two pretend to put make up on them.)

Make-up Artist 2: (talking to 1) Do you know what kind of music the Pilgrims danced to?

M-u Artist 1: Oh, great! Can we stay focused on this make-up?

M-u Artist 2: Part 3 coming up is called "The New Colossus." That is the title of the poem inscribed on the base of the Statue of Liberty.

M-u Artist 1: Let's see what else we can find out about the Lady with the Torch! I did her make-up!

"Our Heritage of Blessings"
Print script