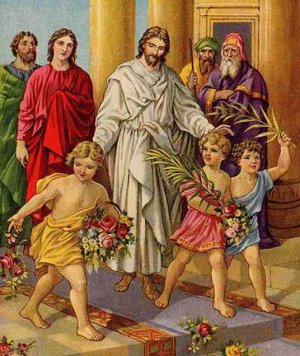 Jesus and his disciples were on their way to Jerusalem for the Passover Feast. Jesus told two of his disciples to go into the village on the way and there they would find a young donkey that had never been ridden. They were to bring it to Jesus. If anyone questioned them, they were to say "The Lord needs it and will send it back soon."

Years before, the prophet had said, "See your king comes to you, gentle and riding on a donkey, on a colt".

They brought the donkey to Jesus and put their cloaks (coats) over it and he sat on it. As they rode along, the people began to throw their cloaks in the path ahead of them. Some cut branches and placed them in the path. They were making a way for the entrance of their king.

They shouted, "Hosanna to the Son of David! Blessed is he who comes in the name of the Lord. Hosanna in the highest." 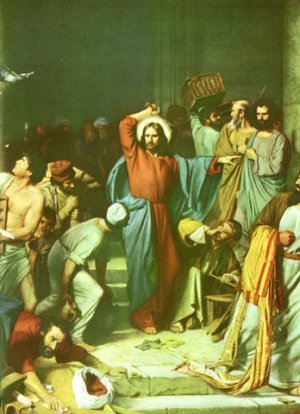 He said, "Get these out of here! How dare you turn my Father's house into a market!"

The children were again shouting, "Hosanna to the Son of David". The temple leaders asked him if he heard what the children were saying. "Yes," he said, "From the lips of children and infants you have ordained praise." Jesus loves to hear the praise of children.

What does this story
mean to me?
Jesus entered Jerusalem riding on a donkey. The children sang songs of praise and gave Him honor.

How can you honor Jesus today? You also can sing songs of praise to Him. You can honor your parents and in so doing you will honor Jesus. When you don't show respect, you cause others to speak badly of you and of your parents and bring reproach upon them.

The story of Jesus going to Jerusalem can be found in Mark 11:1-19

Memory Verse
And the multitudes that went before, and that followed cried, saying, "Hosanna to the Son of David! Blessed is he that cometh in the name of the Lord. Hosanna in the highest." Matthew 21:9
Take the online test

Research Links
English Bible Activities Select stories #220 and 221 in the list for activities to accompany this Bible story.

Spanish Bible Activities Select stories #220 and 221 in the list for activities to accompany this Bible story.