The Conversion of Saul 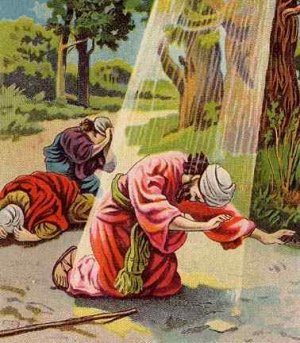 
Saul was an angry man who persecuted Christians. Persecute means to treat in a cruel and mean manner.

Saul was on his way to Damascus to arrest any Christians that were in the synagogues. A synagogue is a building used by Jews for worship and teaching. Then an amazing thing happened. Saul was thinking about how he could hurt the Christians as he traveled. As he came near Damascus, a bright light suddenly shone down from heaven.

Saul fell to the ground, and a voice said, "Saul, Saul, why do you persecute me?"

Saul answered, "Who are you, Lord?"

The voice then said, "I am Jesus whom you are persecuting. It is hard for you to fight against me. Go now into Damascus and you will be told what you must do."

When Saul got up from the ground, he was blind. Others had to lead him by the hand into the city. For three days Saul was blind and did not eat or drink anything.

God told a man named Ananias in a dream that he should go see Saul. He found Saul and laid his hands on him, and Saul was able to see again. The preacher told him to arise and be baptized and wash away his sins.

Saul was sorry for the things he had been doing. He began doing the things that Jesus wanted him to do. After his conversion, Saul's name was changed to Paul, and he spent the rest of his life serving Jesus and teaching people about him. He became a missionary to people all over the world. A missionary is a person who is sent by a church to teach about Christ.

Paul, the apostle, suffered many persecutions. Instead of being the person who hurt other Christians, he became persecuted himself for Christ's sake.

Read the story in Spanish Pablo

What does this story
mean to me?
Saul was guilty of many sins including the killing of Christians, but God forgave him of even such a great sin. God will forgive us of our sins if we repent and turn from them.

God had a special job for Paul to do. He saw great potential in Saul that could be channeled for good. Prepare your heart. God may have some great work for you to do when you grow up. Be ready for it. Take every opportunity to learn. Develop a servant spirit while you are still a child.

Memory Verse
Then he fell to the ground, and heard a voice saying to him,
"Saul, Saul, why are you persecuting Me?"
And he said, "Who are You, Lord?"
Then the Lord said, "I am Jesus, whom you are persecuting" Acts 9:4-5

Would you like to study an Art Lesson about The Conversion of Paul?

Spanish Bible Activities Select story #252 in the list for activities to accompany this Bible story.

Read and hear the story of Paul from Kids' Bible Stories


Books
Press "Go" to search for books about Paul.
Credits and Solutions
Puzzles on these pages courtesy of
Songs of Praise and Armored Penguin