The Baptism of Jesus 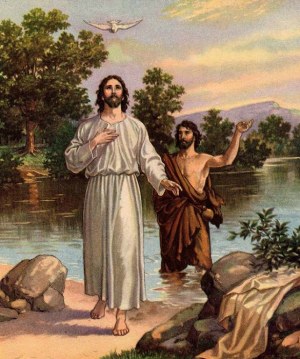 John had been baptizing in the Jordan River. One day Jesus came from Nazareth in Galilee and asked John to baptize him. John protested because he felt that Jesus was the one who should be baptizing him. But Jesus told him that they needed to do this to fulfill all righteousness. It was the right thing to do. So John baptized him in the river.

Immediately after he was baptized, as he was praying, the heavens were opened and a dove came down and rested on Jesus. It was the Spirit of God in the form of a bird that had come down to show who Jesus was. Jesus saw it and John also saw the dove.

Suddenly there was a voice from heaven saying, "You are my beloved Son, in whom I am well pleased". The dove and the voice of God were a sign to John that Jesus was the Messiah who had been promised. 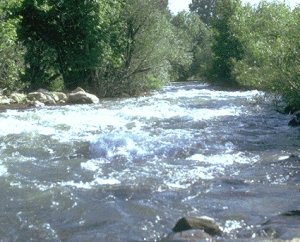 After this, John was again assembled with a group of people, and Jesus approached the group. John told them what had happened. He said, "Behold! The Lamb of God who takes away the sin of the world!" He told them that he had seen the Spirit of God coming down on Jesus in the form of a dove. He said this had been a sign to him because God had revealed to him that the person on whom he saw a dove descending would be the Son of God. This is how John would know for sure.

Now John and Jesus were relatives and had grown up together. John's mother, Elizabeth, had known from the beginning, even before Jesus was born, that her kinswoman Mary was going to be the mother of the Son of God. Jesus was God in human form who had come to earth. It seems that John was not aware of Jesus' true identity until this event at Jesus' baptism.

John had a mission to prepare the people for the coming of Christ, and he was fulfilling his mission. Now the Christ was revealed.

Some people came to John and told him that now the crowds were going to Jesus instead of John. They thought he would be upset, but this didn't bother John at all. He said that he had told them that he himself was not the Christ. It was as if Christ were the bridegroom and John was just the best man, or friend of the bridegroom. He was rejoicing that people were turning to Christ. John said that Jesus must become greater and he, John, must become less important.

What does this story
mean to me?
Jesus told John that he wanted to be baptized to "fulfill all righteousness".

This story about the Baptism of Jesus can be found in the Bible in Matthew 3:13-16

Memory Verse
Suddenly a voice came -from heaven saying, "This is my beloved Son, in whom I am well pleased." Matthew 3:17 (NKJV)
Take the online test

Song of The Baptism of Jesus

Memory Puzzle The Baptism of Jesus

Spanish Bible Activities Select story #174 in the list for activities to accompany this Bible story.


Books
Press "Go" to search for books about The Baptism of Jesus.
Credits and Solutions
Picture courtesy of The Bread Site public domain clipart collection