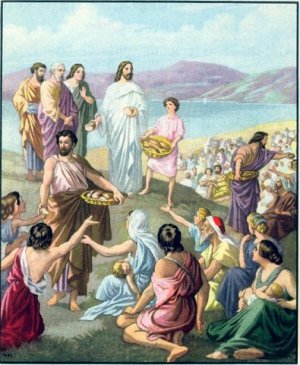 Great crowds of people followed Jesus because they saw the miracles that he did, and they wanted healing for themselves and their families. Jesus and his disciples were so busy they didn't even have time to eat. He decided that they needed to get away and just be by themselves for a while. This was a particularly hard time because Jesus had just learned of the death of John the Baptist.

He and his disciples crossed the Sea of Galilee in a boat, but people saw where they were going and came out of the surrounding cities and were waiting for them on the other side of the sea. When Jesus saw the people, he felt sorry for them. They were like a flock of sheep without a shepherd to lead them. Jesus spoke to them about the kingdom of God and healed those who needed healing.

It was getting late in the day and the disciples came to him and suggested that he send the crowd away so they could go into the neighboring countryside and villages to find a place to eat and spend the night.

Jesus said, "They do not need to go away. You give them something to eat." The disciples knew they didn't have enough money to buy food for all those people. There were about 5,000 men plus all the women and children!

He asked Philip where they could buy bread. Now Jesus was just testing him. He already knew how he was going to feed them. Philip said that it would cost 200 denarii ( dih NAIR ih eye) to buy enough bread for each person to have just a little. A denarius (dih NAIR ih us) was the wage for a day's work. So 200 denarii would be the amount of money a man could earn by working 200 days, nearly seven months.

Andrew, the brother of Simon Peter, told Jesus that there was a boy in the crowd who had brought a lunch. The lad, or someone who cared for him, had planned ahead and he had five barley loaves of bread and two small fish. Even though he had brought the lunch for himself, he was willing to let Jesus use it.

There was a lot of grass in that place and Jesus told the disciples to have the people sit down in groups of 50 and 100. Then He took the loaves and gave thanks and started breaking them and passing the bread out to his disciples. The bread began to multiply and make more bread. They broke the bread again and again.

He did the same with the two fish. They kept passing out the food until everyone had eaten until they were full. Then Jesus told the disciples to pick up the remaining food so nothing would be wasted. Do you know how much was left? There were twelve baskets full of leftover bread and fish!

When the men saw how he had fed all of the people, they said, "This is truly the Prophet who is to come into the world!"

Jesus saw that the people were ready to take him by force and make him a king, so he left and went off into a place alone.

Read the story in Spanish Jesús Alimenta a una Multitud

What does this story
mean to me?
Jesus used a boy's lunch of five barley loaves and two small fish to feed thousands of people. Sound impossible? It is impossible without God's power.

Sometimes God uses something very small to accomplish something very important. What do you have that God can use? Do you have the gift to sing or show kindness to others? Can you, by being thoughtful, help others to be happy? Can you be patient with your brothers or sisters to help create harmony in your family?

Small things? Maybe, but so important in the lives of those around you!

Memory Verse
I am the bread of life. He who comes to Me shall never hunger, and he who believes in Me shall never thirst. John 6:35 (NKJV)
Take the online test

Spanish Bible Activities Select story #197 in the list for activities to accompany this Bible story.