Down Through the Roof 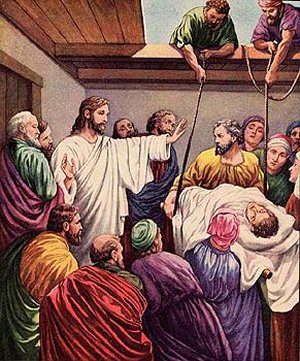 Jesus was in a house in the town of Capernaum (kuh PER nih um). There were so many people in the house that on one else could even get in the door!

Some men brought their friend to Jesus. The man was a paralytic (pair uh LIT ik). He was paralyzed and could not move. His friends believed that Jesus could make him well, but they couldn't even get in the door.

They had an idea. They would find another way into the house. If they could get up on the roof, they could remove a part of the roof and make a hole above the crowd. That is just what they did. Then they attached ropes to the bed on which their friend was lying and slowly lowered him down into the room, right in front of Jesus!

When Jesus saw their faith, he said, "Son, your sins are forgiven."

Some Jewish leaders were sitting there and they were thinking, "Only God can forgive sins. How can this man tell him that his sins are forgiven."

So to prove to them that he could forgive sins, He did the harder thing. He said, "Take up your bed and walk." And the man who had been unable to move, stood up and walked. Everyone could see what had happened as a result of Jesus' words.

The people could hardly believe their eyes. They had never seen such power!

What does this story
mean to me?
We can learn a lesson about friendship from this story. The lame man had some very good friends. They were determined to get their friend to Jesus. They even pulled him up on top of the house and made a hole in the roof to bring him to Jesus.

You can be such a good friend. If your friend knows Jesus, you can encourage him or her. If they do not know Jesus, you can look for ways to bring them to Jesus as the four friends in the story did. Invite them to go to Sunday school or to Vacation Bible School with you. Share the lessons that you have learned with them.

Always set a good example for your friends by doing the right thing.

You can read about the Man Through the Roof in the Bible in
Mark 2:1-12

Memory Verse
Praise the Lord, O my soul, and forget not all his benefits. He forgives all my sins and heals all my diseases. Psalm 103:2-3 (NIV)
Take the online test

Song of Down Through the Roof

Memory Puzzle Down Through the Roof

Spanish Bible Activities Select story #180 in the list for activities to accompany this Bible story.

Puzzles on these pages courtesy of Armored Penguin.com