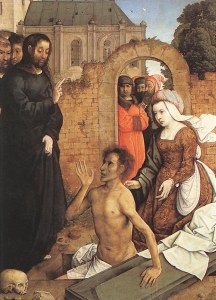 Jesus had some close friends; Lazarus and his sisters Mary and Martha. He often visited in their home.

One day Martha sent word to Jesus that Lazarus was sick, but He didn't go to them right away. He waited and during that time Lazarus died.

When Jesus finally decided to go to Bethany, Lazarus had been dead for four days. Martha heard that Jesus was coming and she ran out of the house to meet him. He was at the edge of the town, but had not entered it yet. She said that if Jesus had been there, Lazarus would not have died.

Jesus said, "Your brother will rise again." Martha thought he was speaking of the resurrection at the end of time. She didn't seem to understand that Jesus was talking about a time very soon.

Jesus talked to her about the resurrection and asked her if she believed. She said, "Yes, Lord, I believe that you are the Christ, the Son of God who was to come into the world."

Martha went to get her sister, Mary, who came and fell at Jesus' feet. She said the same thing that Martha had said, "If you had been here he would not have died.

When Jesus saw them crying, he also cried with them.

They went to the place where Lazarus had been buried. It was a cave with a stone over the opening. Jesus told them to take away the stone.

Then he prayed to God and said, "Lazarus, come out!", and from the cave Lazarus came walking out. He was wrapped up with strips of linen and a cloth around his face.

Jesus said, "Take off the grave clothes and let him go."

Mary and Martha and their friends were so happy. Lazarus was alive and back with them again! After this, many of the Jews believed on Jesus.

What does this story
mean to me?
Mary and Martha each said that if Jesus had been there, their brother would not have died. Do you think they were surprised and amazed when Jesus made Lazarus alive again? It seems they had not even thought of such a thing happening. Martha was reluctant to even open up the tomb. But Jesus is amazing!

Jesus can do even more than you might think possible. He has greater plans for you than you can even imagine. Let him guide your thoughts and actions and prepare to be amazed!

You can read about the raising of Lazarus from the dead in the Bible in
John 11:1-46

Memory Verse
I am the resurrection and the life. He who believes in Me, though he may die, he shall live. John 11:25 (NKJV)

Spanish Bible Activities Select story #207 in the list for activities to accompany this Bible story.


Books
Press "Go" to search for books about Lazarus.
Credits and Solutions
Puzzles on these pages courtesy of
Songs of Praise and Armored Penguin