The Parables of Jesus 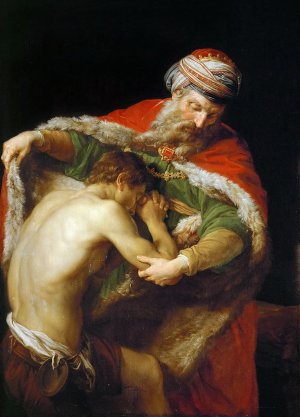 Jesus told the story of the prodigal (wasteful) son.

A rich man had two sons, whom he loved very much. The younger son asked for his inheritance and then left home. The older brother stayed home and helped his father. Before long, the younger son had spent all his money, and his so-called friends left him because he was no longer rich.

Then a famine came upon the land. The young son was all alone, and he even took a job taking care of pigs. He was so hungry that he wanted to eat the pig's food.

Finally, he decided that the servants in his father's house were better off than he was, so he started the long journey back home. His father forgave him and welcomed him home. They had a grand feast and celebration. The father gave him a robe, a ring, and shoes. The older brother was angry, but his father told him to forgive his brother and to rejoice that he had come home.

God loves us just as this father loved his son. 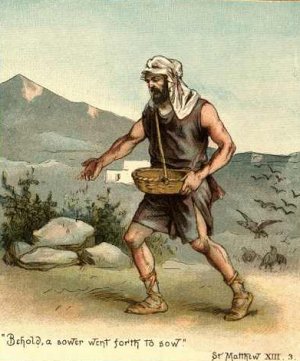 The Parable of the Sower

In this story, Jesus told about the word of God being like seed that a sower (farmer) threw out. It fell on many kinds of soil.

Some of the seed fell by the wayside, along the path. The birds came down and ate the seed. This is like the person who hears the message, but does not understand it. The evil one comes and takes it away.

Some seed fell on the rocky ground.The plants came up quickly, but there was not much earth so the plants dried up. This is the person who receives the word, but falls away when trouble comes.

Some seed fell on the thorny ground and the thorn bushes choked the seed. This is the person who is worried about life and wealth.

Then some of the seed fell on good ground. Those seed grew into healthy plants and produced a good crop, some a hundredfold, some sixtyfold and some thirtyfold.

"The good soil," said Jesus, "is like people who are honest. When they hear God's word, they remember it, and do what God says." These people produce a bountiful crop for the Lord. 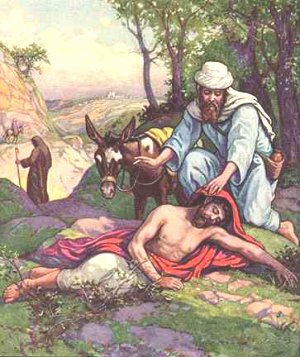 This is a story that Jesus told when a man asked what he must do to have everlasting life. "What is written in the commandments?" Jesus asked.

Then the man wanted to know, "But who is my neighbor?" Jesus then told about the man who was on his way from Jerusalem to Jericho and was robbed and beaten and left half dead by the roadside.

First a priest came by, and when he saw the wounded man, he passed by on the other side.

Next a Levite came and he, too, looked at the hopeless man and passed by on the other side of the road.

Then a Samaritan came along. He took care of the hurt man and then put him on his donkey and took him to an inn to stay. The Samaritan paid for everything.

When Jesus finished the parable, he asked, "Which of the three men was a neighbor?"

The man answered, "The man who took pity on him."

Jesus told him, "Go and do likewise."

What does this story
mean to me?
We learn two great lessons from the parable of the prodigal son. First we see the love of the father for the son. God is our Father, and when we repent, He is anxious and ready to forgive us. All we have to do is change our ways and say, "I'm sorry". This gives us a great hope because we sometimes do things we ought not to do.

Second, we learn a lesson from the older brother. He was not willing to forgive his younger brother who had sinned. If your friend wrongs you and asks your forgiveness, are you willing to forgive and be friends again? God wants you to have a forgiving heart.

Memory Verse
It was right that we should make merry and be glad, for your brother was dead and is alive again, and was lost and is found. Luke 15:32
Take the online test

Song of The Good Samaritan

Online and Printable Coloring Pictures about The Parables of Jesus

Research Links
English Bible Activities Select stories #192, 208, and 210 in the list for activities to accompany this Bible story.

Spanish Bible Activities Select stories #192, 208, and 210 in the list for activities to accompany this Bible story.


Books
Press "Go" to search for books about The Parables of Jesus.
Credits and Solutions
Visit The Bread Site public domain clipart collection

More Images - The Parables of Jesus