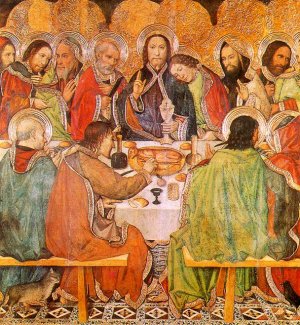 Peter and John went into the city. As they walked along the street, they saw a man carrying a jar of water. (This was how Jesus said Peter and John would know the man.)

Peter and John followed the man to a house. Then they talked to the owner of the house about a room for the supper. They said that the Master wanted to eat the Passover there. He showed them a large upper room. The room was furnished and they began to get everything ready for the Passover Feast. Then Peter and John waited for Jesus and the other disciples.

As they ate the meal, Jesus told about the things that were about to happen. He blessed the bread and broke it. Then he gave it to them. He said," Take, eat, this is my body." He gave thanks for the drink in the cup. He said, "This is my blood which is shed for you. 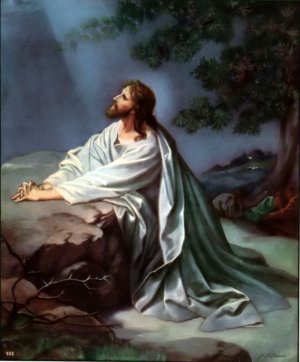 Praying in the Garden

Not long after Jesus and his disciples ate the Passover supper together, one of the disciples, Judas Iscariot, betrayed him to the priests and rulers of the Temple. These men had been looking for a chance to arrest him. Jesus knew this would happen. In fact, he had told the disciples that he would be betrayed by one of them.

After Jesus and the disciples left the room where they had eaten the Passover supper, they went to the Mount of Olives and into the Garden of Gethsemane. Jesus asked the disciples to wait, and he went farther into the garden to pray. Judas had left earlier by himself. After some time, Jesus came back to the disciples who had gone to sleep. He was very sad and he went to pray three times, but the disciples were too tired to stay awake.

He woke them up, and as they were talking, Judas came up to them. He was with some of the rulers from the Temple. Judas when he saw Jesus, ran ahead and kissed him. This was the signal to the soldiers to identify Jesus. The soldiers who were there came to take Jesus. Peter at first wanted to fight, but Jesus told him, "No." Jesus agreed to go with the men.

Read the story in Spanish 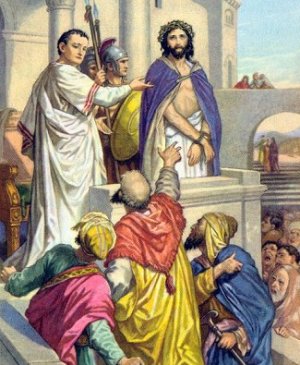 The soldiers took Jesus to Caiaphas, the high priest. There he had a trial. The priests and rulers agreed that he was guilty of claiming to be God's son. They did not believe that he was. They agreed that he should be put to death.

The soldiers made fun of Jesus. They called him a king, but they didn't believe that he was. They put a crown of thorns on his head and a staff in his hand. They put a scarlet (red) robe on him and spit on him. And they whipped him. 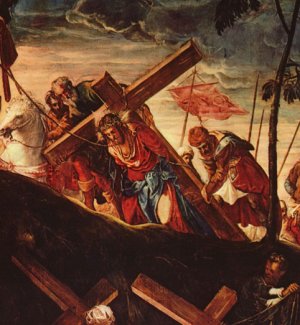 The Death of Jesus

The soldiers took Jesus away to a hill called Golgotha or Calvary. There they crucified him and put him to death on a wooden cross.

But even while he was on the cross, he forgave those who were crucifying him. He said, "Father, forgive them. They don't know what they are doing."

It was during this time that some people came to know that he was the Son of God. One of these was a thief who was being crucified on a cross next to Jesus. Another who believed was a Roman soldier who was watching. There was a great earthquake. When the soldier heard the earthquake and saw the things that were happening, he became afraid and said, "Truly this was the Son of God!"

When Jesus died, the thick curtain in the Temple was torn apart. It ripped from the top to the bottom. This curtain had separated two rooms. In one room only the high priest could go, and in the other room, others could go. When Jesus died, he made it possible for all people to go to God and worship him without anyone else in between. Jesus is now our high priest.

Read the story in Spanish

What does this story
mean to me?
Jesus suffered terribly in order to save us. During that time of suffering He sets an example for us to show us how we should treat people. He asked God to forgive those who were torturing and killing Him.

In view of what He has done for us, how can we refuse to forgive others? It is unthinkable that we should be unwilling to forgive a wrong done to us. Maybe someone has hurt your feelings, but they haven't nailed you to a cross, have they?

The Bible teaches us that we will be forgiven in direct relation to how we forgive others. This is really a serious thought. Do we want forgiveness from God? Then we need to develop a forgiving spirit toward others.

Memory Verse
When they had come to the place called Calvary, there they crucified Him, and the criminals, one on the right hand, and the other on the left. Then Jesus said, "Father, forgive them, for they do not know what they do." Luke 23:33-34
Take the online test

The Last Supper
Gethsemane
The Trial of Jesus
The Crucifixion

Research Links
English Bible Activities Select from stories #229-237 in the list for activities to accompany this Bible story.

Spanish Bible Activities Select from stories #229-237 in the list for activities to accompany this Bible story.


Books
Press "Go" to search for books about The Crucifixion.
Credits and Solutions
Puzzles on these pages courtesy of
Songs of Praise and Armored Penguin